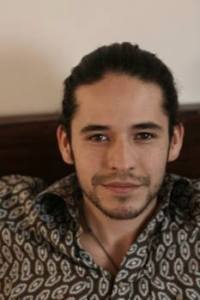 While he was still an art student in New York, Duncan Tonatiuh was spotted by a professor and got the break that people dream of. Here we talk with the author of Separate is Never Equal about his journey into publishing – and about the mysterious way that 14th century art can bring a modern day Civil Rights story to life.

1. You are both the author and illustrator on your projects, an ability that I envy. Do you find writing or illustrating more challenging? What is your art process when you’re working on a book?

I find both writing and illustrating challenging, especially when I’m first starting a project. But its extremely rewarding to make a book. When I make a book I usually begin with the text. As I write, though, I always think of what the layout of the page will be and what the illustrations could look like in that spread. I make little thumbnails next to my manuscript. Once the text is close to being done, I draw sketches and I make a dummy of the entire book in black and white. As I draw I’ll sometimes go back to the text and change it so that the words and the pictures fit better together. After I make a dummy of the book, I add color and textures to my drawings. I, of course, work with an editor and with an art director who give me comments and feedback throughout the process.

2. I heard you say once that you came to writing and illustrating for kids accidentally. I’d love to hear a little bit about that lucky accident, too.

I attended Parsons School of Design in New York City. I took classes in several departments there, but mostly in the illustration and in the writing department. For my senior thesis I made a very short graphic novel about an undocumented worker named Sergio who was a friend of mine. One day Professor Julia Gorton came to critique my class’s work. She really like my illustrations and asked me if she could show them to an editor at Abrams she was friends with and had worked with on several children’s books. “Of course,” I said.

Howard, the editor liked my illustrations, too, and I met with him at his office, which happened to be a few blocks away from my school. He told me that he would like to work with me and that if he received a manuscript that suited my style he would get in touch with me so I could illustrate it. I told him I liked writing, too. He told me a few basic things about picture books, like the fact that they are usually 32 pages long and that its a good idea to have the protagonist be a kid or an animal that a child can relate to. “If you write something, send it to me,” he said and he gave me his email.

A month or so later, I had the idea for a book about two cousins, one who lives in a rural community in Mexico and one who lives in an urban center in the US.  They send letters back and forth to each other about their everyday lives. I wrote the story and I sent it to Howard. He liked the story a lot, but my story rhymed, and I am terrible at rhyming. “We want to publish the story,” he said. “It’s a great concept. But no rhyming, please.” I worked with him on the story over the next months, and it eventually became my first book Dear Primo; A Letter to My Cousin. My fifth book with Abrams will be out this fall and they’ve all been edited by Howard. I was always interested in writing and drawing, but I had never considered children’s books until the opportunity presented itself to me.

sample of the Mixtec codex

3. Your style is very distinctive. Would you tell us a little bit about the traditional art that has influenced your work?

The short graphic novel I made for my senior thesis is called “Journey of a Mixteco.” My friend, Sergio, is Mixtec, meaning that he is part of an indigenous group from the south of Mexico. There is a large Mixtec community in New York City. I was fascinated when I first learned this and when I heard Sergio and his relatives speaking their indigenous dialect in a city thousands of miles away from their native village.

From Separate Is Never Equal

One of the first things I did when I decided to work on the project about Sergio was go to the library and look up Mixtec artwork. I was delighted when I found images of Mixtec codex from the 14th century. I was immediately drawn in by the images. They are very stylized, geometric and harmonious. I decided that I was going to make a modern day codex of Sergio’s story. I adopted some of the aesthetic from those codex, like the fact that the images are very flat. There is no vanishing point.  People and animals are always drawn in profile, and their entire bodies are usually shown. Ears sometimes look like the number 3. I’ve been drawing in that codex-like style ever since. My hope is to celebrate that beautiful tradition of art and to hopefully keep it alive and make it relevant to kids nowadays.

4. You tackle pressing issues regarding the history of Latinos in both the US and Latin America. I’m thinking of Pancho Rabbit as it relates to border crossing, and now of Separate Is Never Equal, about the hard fought effort to desegregate schools. How do you go about making these thorny issues relatable to children? What are the sorts of considerations that go into how you structure the book and/or tell the story for young readers?

I think children are extremely intelligent. I make books about subjects that interest me like history, social justice and art, but I try to do it in a way that will hopefully be interesting and relatable to children. My goal is to make books that are not didactic, but rather that a present an issue so the readers can come up with their own conclusions.

With Pancho Rabbit the book is a fable, much like the Little Red Riding Hood. Kids engage with it because the story is suspenseful. The story is an allegory too though. It has a second layer of meaning and it speaks to the hardships undocumented migrants experience to reach the US. I am proud of that book because I can read it to very young children who only view it as a story, but I can also read it to older readers who grasp the second layer in the book.

In the case of Separate Is Never Equal I had to balance putting enough information in the story, like dates and names, but also not putting too much information so that young readers would stay engaged. I had to explain or simplify certain concepts, like what segregation is or what a court case is. I’ve had the opportunity to present the book to students in different parts of the US and they always engage with it. They relate to it because the protagonist is a young girl, because it takes place in a school and because often times the students I’m presenting to attend schools where they are experiencing similar problems to the ones the Mendez family experienced. 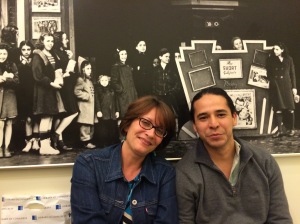 Meg and Duncan at the Las Américas Award 2014

5. What are you working on next?

I have a new picture book coming out this fall. It is called Funny Bones: Posada and His Day of the Dead Calaveras. It is a biography of Guadalupe Posada, an artist who drew the very iconic Day of the Dead skeletons. Posada, or Don Lupe, as everyone called him when he was alive, is not a very well-known artist, but his images are, and he influenced many famous artists like the Mexican muralists Diego Rivera and Jose Clemente Orozco.

The book talks about his life and the different artistic processes Posada used. The book also talks a lot about the Day of the Dead and the different traditions associated with it. In the book I include a lot of Posada’s images. I try to give context and explain why he drew the calaveras he drew, and I ask questions wondering what they might mean. Why did he draw a skeleton wearing a flamboyant hat? Was he trying to say that no matter how fancy your clothes are on the outside on the inside we are all the same? That we are all calaveras?

6. You are a new father. Congratulations! Part of your job is going to be to make a strong girl. Any ideas on some of the ways you’ll do that?

I think she is a strong girl already. I think part of my job will be to encourage her to work hard, to not give up when she confronts a challenge and and to help her face obstacles with determination and a good attitude.

6. Finish this sentence for me : Strong girls are– intelligent, kind and determined. Strong girls make the world a better place.

This site uses Akismet to reduce spam. Learn how your comment data is processed.