Twelve-year old Lanesha was born with a caul over her face, signifying that this child carried a gift – the gift of seeing and speaking with spirits. For that reason, her blood-family won’t have her. They live uptown in the same city, New Orleans, yet might as well be a whole world away from the lower Ninth Ward where Lanesha lives with her guardian, Mama Ya-Ya, who took her in after her mother died giving birth to her. Lanesha’s classmates mock her, too, because of the gift of the caul. They’re afraid of what they don’t understand.

Spirits everywhere greet Lanesha. At school there’s a boy her age, a ghost in baggy pants, and all through the neighborhood, Lanesha sees ghosts, young and old, from just yesterday and ghosts, black and white, from long ago. Lanesha sees her mother’s spirit, too, lingering in repose on the birthing bed at Mama Ya-Ya’s house. She’s been right there since the day Lanesha was born, yet Mama’s spirit never speaks. Lanesha knows she never really rests either.

Only Mama Ya-Ya, TaShon, and her neighbors in the Ninth Ward accept her, so Lanesha finds her solace in words, collecting them one by one, getting to know each word and all that it could mean. Words like unfathomable and omen. Mama Ya-Ya teaches Lanesha how to embrace her gift of seeing spirits and how to befriend the meanings within those words.

To survive this hurricane, Lanesha and TaShon will need all of Mama Ya-Ya’s wisdom and aid from Lanesha’s spirit-friends, too. Lanesha will need to crack open those words she’s learned and absorb their power. Powerful words like fortitude and suspension can help Lanesha through Hurricane Katrina.

Ninth Ward is author Jewell Parker Rhodes first novel for young readers. Strong and steady from the eye of Katrina, Parker Rhodes wields her own powers of voice, imagery, and metaphor. Even once the levee breaks, Parker Rhodes rises above with words and characters strong and beautiful enough to do more than survive.  Ninth Ward is a fantastic story of friendship, family, and resourcefulness. It’s also an outstanding tribute to the sense of pride and depth of resolve that we’ve seen and continue to see in the people of New Orleans. GA 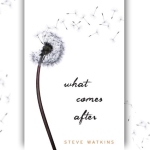 Once while at a writing conference, I heard a famous author ask, “Does the world really need more stories about child abuse?” Almost everyone in the audience laughed. I got kind of ticked off.

Does the world need more baseball stories? More World War II stories? More talking animal stories? Are children still being abused at the hands of their families? Yes, yes, yes, and yes. Our world needs many more stories of triumph over trauma, especially those told by authors such as Steve Watkins who infuse the telling with insight, beauty, and clarity.

What Comes After is the realest of realistic fiction. In this, his second novel, Watkins fictionalizes a harrowing and true crime of an orphaned teen beaten at the hands of her extended family to the point of hospitalization. The story begins with a newspaper account of the beating, which conceals the victim’s identity. From there, we meet sixteen year-old Iris Wight just after her father’s death, just before she is sent to live with distant relatives in North Carolina. The story’s main villain, Aunt Sue, sees Iris – or more accurately, Iris’ trust fund – as a meal ticket. Free labor for the family’s goat farm. Right away, Aunt Sue begins to withhold all sustenance from Iris and attempts to strip her of her identity completely.

Iris, however, instinctively reaches into the depth of her own heart and soul and memory, turning What Comes After into a story of resiliency. She writes letters to her deceased veterinarian-dad. She finds ease and relief in the natural world. As Iris begins to care for the animals on Aunt Sue’s farm with skills she learned while accompanying her father on his rounds throughout her childhood, we see vividly how her dad’s nurturing presence attends to Iris, even long after his death.

As a reader, I found myself grasping for Iris’ name about mid-way through the book. I willed myself not to forget the girl, not to let Aunt Sue take away everything even from the story. The almost-disappearance of Iris as a person throughout the narrative is no accident and is, I think, a sort of ghost journey for the identities of so many abused children, invisible and unknown to us. Watkins sets this up from the first page and though I wanted to turn away, put the book down, I did not do it because. Because I trust Steve Watkins and his knowledge of how resiliency works, how it unfurls and rises up when it is needed most. Because I do believe that we need to hear these stories so we remember there is work yet to be done.

Watkins is a mandated child abuse reporter who volunteers for his local Court Appointed Special Advocates office (CASA). In 2010, over 1,000 CASA offices throughout the U.S. restored 237,000 children in America to safety. Watkins brings his real-life experience of working to end family violence to his writing. From having witnessed healing and recovery, he knows that early nurturing, social connections, friendships, and support in a crisis are key to a child’s ability to survive and, ultimately, to thrive. Yes, he sends Iris on a journey to hell. Yes, he is very clear that the fictional character, Iris Wight, is willing to make this journey on behalf of the hundreds of thousands of children who we may only read about in the newspaper, but thankfully, Iris Wight is well-equipped to make the return trip. GA

Angela Johnson writes the South, writes summer, and writes family like nobody’s business. Her middle-grade novel, Bird, stands as a testament to the very best qualities of the American South – forgiveness, acceptance, and triumph over suffering.

The main character, thirteen year old Bird, knows what she wants – a whole, complete family. She spends her summer in pursuit of her step-father, who has left Bird and her mother in Cleveland. Bird runs far away to Acorn, Alabama in the hopes of finding the only man she’s ever known as father, sure she can convince him to return. But, living in an old shed and snitching leftover pancakes with strawberry syrup while the farm family attends church can’t go on forever. While hiding out, Bird sees people in Acorn who think they’re invisible, yet some Acorn folks also see Bird and resolve to help her.

Johnson tells the story from the perspectives of Bird as well as Ethan and Jay, two Acorn-boys who befriend Bird and in doing so find an easier way of facing their own grief over personal losses. Readers will linger with Bird in a pond so big it ought to be called a lake, so true it summons the children in the story to explore its depth and their own. Readers will also hold their breaths while joy-riding in an old lady’s pickup truck that stirs up a fine red dust from the red dirt road, a dust so fine it settles like baby powder on a girl’s skin and hair. And readers will nod their heads in agreement with Bird’s insights, “In the summer, you can be somebody’s cousin from Michigan or be waiting for your parents who just went into the Fast & Sure Mart for some paper plates or something. You can be almost anybody in the summer.” GA

“No boys, no men, just us women,” is the refrain so joyfully sung is this story by the late Jeannette Caines and in the illustrations by Pat Cummings. What will Aunt Martha and her niece do on their road trip to North Carolina? Whatever they want! Where will they stop along the way? Wherever they want!

Just Us Women celebrates the special bond often present between Aunt and Niece, conjures that magical feeling you get when you arrive back to the loving arms of folks in whose faces you see your own, and affirms the truth that independence, curiosity, and sass are gifts taught and passed generation-to-generation, woman-to-girl.

First published twenty-seven years ago, Just Us Women is one of those books deserving of dual roles: picture-book essential and special-occasion-gift. Share this illustrated anthem to summer road trips with girls and women of all ages – little girls, graduating girls, and even silver-haired girls wearing red hats and purple dresses. GA