The Glass Sentence (Book One: The Mapmaker’s Trilogy) 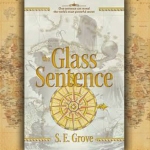 First, the background: In the Great Disruption of 1799, the world broke apart.

Continents were unfastened not only physically but also from time. Now the world is a strange mix of different Ages. Europe, for example, was plunged into a remote century, while the United States became an uneasy mix of adjoining Ages: the Baldlands in the West, Prehistoric Snows to the north, and New Patagonia to the south. Sophia’s Boston is now in New Occident.

It is 1891, and Sophia lives with her uncle, the great “cartologer” Shadrack, who is looking after her in the absence of her parents who, eight years earlier, left on a mission and never returned.

Together in Boston, Shadrack teaches Sophia to read all kinds of maps—some that are locked tighter than the hardest puzzles and those that also chart time. When Shadrack is brutally kidnapped, it’s up to Sophia and her friend, Theo, to find him. The only trouble is, she has never seen any other part of the world except through maps. Can she do it? The world-building is amazing in this smart, girl-led adventure.