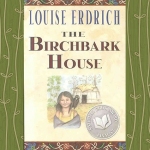 The shero in the Birchbark House, set on Madeline Island off Lake Superior in 1847, receives her name from an Ojibwa girl who was recorded as living on the island in nineteenth century. Author Louise Erdrich writes, “Dear Reader, when you speak this name out loud you will be honoring the life of an Ojibwa girl who lived long ago.”

A member of the Turtle Mountain Band of Ojibwa, Erdrich (National Book Award winner and Pulitzer Prize Finalist) wrote The Birchbark House to retrace her family’s history. The story is told from the perspective of seven-year-old Omakayas, or little frog. Young readers will be completely absorbed by the adventures of Omakayas as she works alongside the women and babysits her little brother. As many young children do, she feels jealous of her older sibling and annoyed by her younger ones. Working side-by-side with her mother and grandmother, she experiences an ability to communicate well with animals, the earth, and her elders, all of which guide her in toward the gift of healing.

When a smallpox breakout ravishes the community, Omakayas is the only one not infected. Her talent for listening to the earth and all its creatures soon helps her care for her family, and she must use all of her power to save them.

The story unfolds in four parts—summer, fall, winter, and spring—and the narrative builds inside the rhythms and rituals of Ojibwa life. Its back matter includes an Author’s Note on Ojibwa language and a glossary and punctuation guide of Ojibwa terms, offering opportunity for continued depth and discovery of Omakayas’s world.

Many have contrasted The Birchbark House to Laura Ingalls Wilder’s Little House series. Wilder’s books carry a cultural bias embedded in the white encroachment on native land and culture as America pushed its boundaries west – a contrast worth noting. The Birchbark House testifies to the decimation and destruction that resulted, yet Erdrich most strongly evokes a feeling of connection among all people, with the earth, and to an Ojibwa girl named Omakayas. – Gigi