A Morning with Grandpa 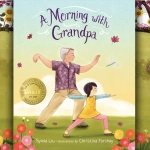 One morning, Mei Mei observes Gong Gong practicing his tai chi, and Gong Gong invites her to practice with him. When Gong Gong shows her such motions as Pick up the Needle or White Crane Spreading Its Wings, his moves are smooth and sweeping, “like seaweed brushing the ocean floor.” Mei Mei watches and tries the movements herself, but her energy hops and bops and bounces into Grandpa. She soon offers to teach Gong Gong her favorite yoga poses.

This uplifting, energetic picture book celebrates adventures in lifelong learning that occur when children and elders discover common interests. Mei Mei and Gong Gong accept each other just as they are! In some ways, they are not alike at all: Mei Mei’s energy is like a bouncing ball; Gong Gong’s energy is like a cool breeze.
-GA

Little Melba and Her Big Trombone

This is the story of how a little girl born in 1926 fights racism and sexism to become one of our country’s most accomplished musicians.

The illustrations are delicious. I’d pair this with Acoustic Rooster by Kwame Alexander for a summer study on jazz.

I’ve been holding on to my copy of Under the Mesquite for a year, waiting patiently to add it to this list. It was my first selection for Girls of Summer 2013, and in my mind, a perfect choice.

The eldest of eight children living on the border of Texas and Mexico, Lupita is in high school, when her mother is diagnosed with uterine cancer. From the first pages where the illness is spoken of in hushed whispers, all the way to the scenes where Lupita finds herself alone to care for her messy brood, the novel is gripping.

The journey is universal, but its treatment of bicultural Latino life is especially strong (explaining her well-deserved Pura Belpré Award in January). The tortillas for breakfast. The relatives strewn on either side of the border. Her father’s job keeping him far away for weeks at a time. Her mother’s comrades – best friends – supporting Lupita and her siblings to keep them from starving. Even her mother’s frightening visit from Death who comes at night dressed as a bridal skeleton rings true.

Interestingly, McCall’s novel-in-verse began as a series of poems she wrote through the years with her students. These were personal pieces about her mother’s death that she would eventually knit into layered story that is as much about loss as it is about coming of age and hope. We see Lupita mourn for her mother and rage against the circumstances, but eventually, she leans on her gifts as a writer and actor help her survive.

A strong girl is sometimes called on to survive the unthinkable. Under the Mesquite is a look at a strong girl who has to find her sense of self while living through the darkest of days of all. It’s a celebration of strength and family. MM