Melinda is the kid no one likes, the girl who called the cops on a high school drinking party and got everyone in trouble. Now she roams through her life at school in baggy clothes, keeping near total silence.

But what really happened at that party? And why can’t Melinda bring herself to tell?

Laurie Halse Anderson’s groundbreaking young adult novel, Speak, was first published in 1999. All these years later, with the #MeToo movement in full swing, we find that Speak: the Graphic Novel is just as relevant today.

With chilling black and white illustrations by Emily Carroll and dialogue taken directly from the original novel, Anderson pulls the reader inside a girl’s experience with sexual assault at the hands of one of her own classmates. Melinda has not told anyone the truth and blames herself in the convoluted way of so many victims. And every day she sees her attacker continue to enjoy the highest social status at school, even as he grooms new victims for his aggressions. The sense of dread is palpable on the pages. Sinking deeper into her depression, Melinda finds respite only in her art class, where she can access her voice and feelings without words. The graphic format of the novel is a perfect complement to Melinda’s journey to use art as a way to name the most horrific acts and lay them bare.

This is a hard story: Melinda is blamed and cruelly ostracized. She learns to hate and hurt herself. But ultimately, the novel is about her resilience and survival despite an entire community that would prefer not to believe or support her. Her strength shines through all the trauma.

Sometimes, girls have to reclaim their power after its been stolen from them. Speak: the Graphic Novel shows them how to win it back.  MM

Just like Girls of Summer is not your school’s summer reading list, Miss Quinzella Thiskwin Penniquiqul Thistle Crumpet’s summer camp is not your mom’s summer camp. Unless, of course, your mom is a “hardcore lady type”!

According to the handbook, being a Lumberjane scout is all about the “joy of cutting wood with an axe, about the stars, the birds, the quadrupeds, the fish, the insects, the plants telling their names; their hidden power or curious ways, about the camper’s life, the language of signs and even some of the secrets on the trail.”

To be sure, like campers everywhere, Lumberjanes do need to be mindful of poison ivy. And, yet, like the handbook says, there are secrets out there. Holy Joan Jett, so many secrets! The nooks and crannies and towers and caverns at this camp are filled with holy kittens, talking statues, magic foxes, river monsters, and a clutch of boys at the camp next door who are both dainty and devilish.

If you can persuade your folks to sign you up for Miss Quinzella Thiskwin Penniquiqul Thistle Crumpet’s Camp for Hardcore Lady Types, you will definitely want to bunk with April, Mal, Ripley, Molly, and Jo. Beware, though, if you dare to break enough rules to earn your Up All Night Badge, you’ll have to clean out the moose stalls. But, holy kitten, it will be worth it!
-GA 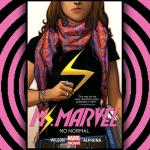 A regular teenager in New Jersey accidentally develops the ability to BECOME VERY LARGE or *shrink down very small* (among other superpowers), leading to a frenetic life of both trying to not fail high school, attempting to keep her family happy, and, oh yeah, save the world a few times.

Kamala Khan is ordinary: she goes to school, has a few close friends, attends her local mosque, and is close with her parents and (mostly annoying) older brother. She’s also a mega-nerd who writes fanfiction about her favorite superheroes and who plays MMORPGs (massive multiplayer online role playing games) in her spare time. So when a strange mist floating through Jersey City abruptly gives her superpowers and has her teaming up with some of her heroes (hello, Wolverine and Carol Danvers), Kamala finds her life totally turned upside down.

The best part about Ms. Marvel is that Kamala isn’t a “chosen one.” The acts of bravery and heroism she performs are all stand-ins for moral choices teens and adults face every day, especially now. Kamala would be a hero even without her powers, because she fights for justice. Readers will be inspired to go out and be a little better, a little kinder, a little more heroic every day.

It’s a documented fact that you need a special power to be a superhero. It has to be something no one else can do. Something so impressive that it earns us instant respect.

How about being able to hear your teachers while they gossip in the lounge or if they pass gas in the restroom?

This year’s Newbery Honor-winning book, El Deafo by Cece Bell, is a hilarious graphic novel about a young girl (well, sort of a rabbit) coming to terms with being deaf in a hearing world.

The list of inconveniences is long for a kid who has to wear a cumbersome device called the “Phonic Ear.” And it’s almost impossible to make everyone understand why turning up the TV louder will not help or why whispering in the dark at a sleep over is maddening.

But there is always a silver lining if you have a hero’s heart. In this case, the silver lining is an ability to use your “Phonic Ear” to hear your teacher’s every movement—including those inside a bathroom stall.

There is so much to love here: the funny illustrations, the wacky characters, the wise look inside the dynamics of friendship. But what I admire most are the many moments in the pages when Bell helps us reflect on how we all make room for each other in this world. ~MM

Raina Telgemeier’s Smile is a hilarious, triumphant orthodontic memoir of the author-illustrator’s middle school to high school years. Girls at that age often have a pretty specific idea of what “normal” means and an equally sure notion that whatever it is, they are decidedly not! Smile captures that universal state of being a totally awesome person yet feeling anything but.

This dental journey begins at the dawn of middle school. One evening coming home from Girl Scouts, Raina takes a hard tumble on the pavement and severely injures her two front teeth. Welcome to the world of headgear, braces, and false teeth. Add to this dental drama a major earthquake, confusion over who exactly is friend or foe, and failing to make the basketball team. Through it all, Raina discovers time and time again that one key to self-acceptance and connecting with others is hidden in that truism: smile and the world smiles back.

Smile was recommended to me last summer by a strong girl who couldn’t…wouldn’t put the book down. Since then, I’ve shared Smile with several girls, and it has quickly become a favorite. The story and the drawings are rich with details, humor, and emotion. The scenes in the dentist’s office actually turned me a little queasy. The full panel of a portion of the October San Francisco skyline, followed by a page of after-school homework being done with the TV on in the background, conveys an incredible sense of stillness and normalcy. There are many such pages –  every one of them a feast of words, colors, and images – that will welcome you and invite you to ponder the events and themes of your own life. GA